We’re proud to say that MedSignals is supported by our readers. The products purchased through links below may earn us a commission but the opinion in reviews belongs to the author. Learn More
This article was updated on Apr 1, 2020

Hair follicle tests have a reputation of being the most dreaded of all screening methods and for good reasons. If you’re facing a hair follicle drug test, wishing you last smoked 90 days ago for the THC to disappear from your hair, we have bad news.

The good news is that the infinite detection time works only in theory and that THC can be removed from your hair before screening. But how long does weed stay in your hair, and how do you remove it?

Today, we’ll talk about how long does marijuana stay in your hair, and debunk some myths and false beliefs regarding weed in hair.

How Does Weed Get Into Your Hair?

When you consume cannabis, either by smoking, vaping, or eating, the psychoactive compounds of weed are released into the bloodstream. Once in your blood, THC will travel throughout your body, binding itself to cannabinoid receptors, thus exerting its magical effects. 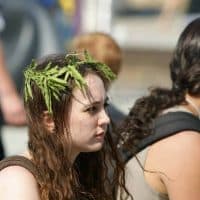 Marijuana is metabolized by the liver and excreted by urine and feces. Approximately 90% of THC metabolites get expelled from your system within five days of consuming. However, THC binds with body fat cells incredibly well, which is why some residual cannabinoids might be detected in drug testing.

When it comes to hair, the same basic rules apply. The hair on your scalp needs nutrients to grow, and it gets those nutrients by blood1.

The process doesn’t occur immediately, as THC requires 5-7 days to pass through the hair papilla and follicle, and become a building block of visible hair. But once it becomes a part of your hair strands, THC and other cannabinoids stay there until you cut the hair off, or perform a hair detox with a special shampoo (we’ll get into that later in the article).

How Long Does THC Stay In Hair Follicles?

The underlying belief among stoners is that THC stays in your hair approximately 90 days. But due to the hair anatomy and mechanisms of hair growth, that claim couldn’t be farther from the truth. Once THC metabolite enters the hair shaft, it will stay there until you shave your hair off, or detox it with a hair follicle shampoo.

90 day detection times myth originated because the lab technicians take about 1.5 inches of hair from your scalp. Now, on average hair grows about ½ of an inch (about 3 cm) per month, which equates to three months, or 90 days detection time2. The truth is that the THC, once it enters your hair,  remains trapped there forever .

… the length of the hair determines how many months we can test for drugs. This usually means that for every centimeter of hair collected is one month we can test. For example, the subject’s hair length is three centimeters, so we can perform a three months drug test.AlphaBiolabs

Frequency of use is one of the  most significant factors  in metabolite build-up and therefore in how long does weed stay in your hair.

One time cannabis users have almost no reason to worry, as the metabolite build-up in their hair should be lower than a cutoff value. The chances for people who smoked one time to fail hair tests are incredibly slim. Though unnecessary, you can use a marijuana removal shampoo (jump to details) to be sure.

Occasional cannabis users do have a chance of failing a hair follicle drug test, as even the small traces of cannabinoids can be detected. If the amount of THC in your hair is above the cut-off level, there’s a solid chance you’ll fail hair tests. So, if you occasionally indulge in some smokey magic, you should clean your hair with drug detoxifying shampoo.

If you’re a person smoking weed regularly, you should stop immediately, and start a full, thorough natural detox procedure (ideally 10 days before the screening), backed up by metabolism supplements. Detoxing your body will expel the remaining cannabinoids from your body, preventing them from entering your hair follicles.

Shortly before the screen, you’ll need to use a DIY detox method, which increases the efficiency of hair follicle shampoo, to remove drug residues from your hair properly.

Every-day weed enthusiasts should perform a thorough full-body detox to remove toxins from their body and prevent more THC from entering the hair. These people will also need one of the home remedies mentioned above, which include several hair detox products, and may consist of some other chemicals. We’ve provided more tips below.

The bottom line is that organic substances, like marijuana, are capable of surviving for an indefinite amount of time in human hair, given favorable conditions. That’s why hair drug tests sport an excellent detection time span and high reliability.

How Does Hair Testing Detect Marijuana?

Once collected, your hair sample is washed by the lab to remove any foreign, external contaminants that may trigger a false positive. After washing, the sample is shredded and dissolved in a solution that breaks it down into its molecular components.

The sample then undergoes the first lab test, which determines the presence of drugs. The procedure involves exposing the sample to specific antibodies that bind specifically targeted molecules – in this case, Δ9–THC.

However, this type of screen has a possibility of returning false positive results, even after the sample has been washed. This is why it’s only used to detect THC or other substance abuse. If the sample tests negative, you’ve successfully passed a drug test.

The GC/MS method accurately determines the overall concentration of drug metabolites in the sample. If the concentration exceeds 0.1 picograms per milligram of hair, the substance abuse is confirmed, and you’ve failed the test. But if the values are beneath the confirmatory values, drug traces are written off as contaminants, and you’ve successfully passed the test.

How To Pass A Hair Test For Marijuana Use?

Marijuana is notoriously tricky to expel from the body, and nearly impossible to remove from hair strands, without cutting them off. But almost impossible only means highly unlikely, and the  possibility of eliminating THC from hair is real .

Regular shampoos do an excellent job of cleaning your hair, but they can’t remove THC from inside the hair shaft. That’s why you should use high-quality hair follicle shampoos, as they’re specially formulated to penetrate the hair shaft and remove drug metabolites. Here’s a list of brands we’ve reviewed and currently recommend.

Labs That Typically Do Hair Testing For Drug Use

Hair follicle tests might be costly, but they’re very sensitive, which is why they’re usually done only by better-equipped, well-known, and respectable labs. Most laboratories can provide basic hair drug tests, which often result in a false positive results. But when talking about accurate hair drug tests, we’re referring to the labs that do GC/MS screening.

Quest Diagnostics
Over the last four decades, Quest Diagnostics have pioneered innovative screening technologies. They have introduced over 100 innovative tests, advancing the science of diagnostic further, keeping them on a cutting edge of laboratory screening. Quest Diagnostics is stationed in the US, with over 2000 patient locations across the United States. They also have operative stations in India, Ireland, and Mexico, with products and services available in over 130 countries.
Cut-Off Values Used By Quest Diagnostics:
Omega Labs
Omega Labs, founded in 1999, quickly became one of the leading laboratories for hair follicle tests. The laboratory soon acquired 30,000 square feet building, which served as a cutting-edge drug screening lab. In recent years, they expanded their capabilities, including oral fluid tests. Due to the increase in demand, Omega Labs expanded its headquarters to 44,000 square feet. Using some of the best methods and lab equipment, and opening stations all across North and South America, Omega Labs truly is one the future of drug testing.
Cut-Off Values Used By Omega Laboratories:
Psychemedics
Psychemedics have been screening hair and urine for illicit substances since 1986. Their teams of scientists, toxicologists, and lab technicians use proprietary and patented technologies for drug testing on each screen. They’re also one of the few labs that have FDA 510(k) clearance for every test and screen. Also, the lab has developed the most extensive wash procedure, eliminating the chances of false positives due to external contamination.
Cut-Off Values Used By Psychemedics:
Back to top

What Kind Of Testing Errors Are Possible?

Rumors are circling the web about the ineffectiveness of hair drug testing, and that they often result in false positives. These claims are false since hair tests have the highest accuracy rate compared to other screening methods (if done professionally).

Let’s all be reminded that hair testing is a two-step procedure. The first step determines the presence of a drug class, while the second determines the concentration levels by a highly accurate and scientifically verified method.

Washing your hair with a high-quality detox shampoo before marijuana drug test is highly advised, even if you’re not consuming cannabis but were in contact with it.

We also strongly recommend testing yourself with a home hair test kit (more info) if you need to pass a follicle screening soon. Modern at-home drug tests are quite precise and some even have an option of anonymous lab testing of your samples. Therefore, you can verify if the hair detox has worked rather than risking of being tested positive when you appear in person.

In conclusion, the answer for “how long does weed stay in your hair?” question is forever. That’s especially bad if you’re facing a hair follicle drug test since those tests feature incredibly high accuracy and an extensive detection window compared to urine tests. Cutting your hair might remove marijuana, but it won’t help you pass hair tests.

Luckily, with the use of high-quality hair follicle shampoo and a structured method like Macujo or Jerry G, you can easily remove THC from your hair. They’re a bit expensive and require you to adhere to specific rules, but they provide fantastic results.