We’re proud to say that MedSignals is supported by our readers. The products purchased through links below may earn us a commission but the opinion in reviews belongs to the author. Learn More
This article was updated on Apr 16, 2020

Pre-employment and random workplace drug tests aren’t the most joyous moments in a stoner’s life. They’d have to abstain from their favorite plant (or substance) and undergo a lengthy detoxification process, which involves cleanse products and supplements. As if that isn’t enough, most cleansing products are pricey and require time and dedication to work.

Behold Certo drug test detox method – the most popular recipe among home remedies, which includes sports drinks, a couple of gallons of water, and Certo/Sure Jell.

But does this simple solution live to its popularity? Let’s find out if Certo method works for drug tests.

In this guide we’ll discuss the effectiveness of Sure Jell method and how to use it to pass a drug test. We’ll also talk about the efficacy of Sure Jell drug test method when it comes to THC metabolites, and answer some of the frequently asked questions.

What Is Certo Drug Test Method?

Sure Jell drug test method helps you to get rid of drug toxins and pass a drug test using pectin from fruits, which is widely available in Walmart and Amazon. Before we start exploring the credibility of the Certo drug test detox method, we should first answer the question:

What Is The Difference Between Fruit Pectin And Gelatin?

When preparing jelly desserts, most people use gelatin, which is collagen derived from animal joints and skin. Fruit pectin is another thickening agent commonly used for jams, but it’s made from fruits, usually apples. It’s basically fiber and tends to be firmer than gelatin, which has a syrupy texture.

Thanks to its water solubility1, fiber in Certo supposedly can absorb and flush out the toxins to aid in passing a drug test. The idea behind this is to exploit fiber processing mechanism of the body. In theory, Certo gel will absorb weed metabolites and expel them from your system through poop.

So, it sounds like this home remedy could work for marijuana users by removing cannabis metabolites.But is it a scientific fact that this product will help you pass a drug test? More on that later.
Back to top

How To Use Sure Jell To Pass A Drug Test

According to weed users on Reddit2, there are two methods of Sure Jell detox to pass a urine sample drug test. These methods are slightly different and mostly depend on how much time you have before visiting the testing facility. For successful detox process, you’ll need:

When it comes to Certo method instructions, there are several different ways people reported to have used. MedSignals managed to find the most suitable Sure Jell method instructions to get rid of drug toxins from your body in order to pass a drug test.

Like with any other cleanse, make sure you stop using drugs as soon as you receive notice of an upcoming drug test. This will prevent the introduction of new drug toxins into the body, increasing the effectiveness of the Certo drug test method.
In the two days prior to your urine sample drug test, you should drink plenty of water. Taking as much water as you comfortably can will help flush out the toxins from your body with urine.
On the day before the test, mix the first pack of Sure Jell or Certo with Gatorade or another sports drink. Shake them together to dissolve pectin properly and consume this DIY detox drink slowly over 15 minutes.
Several hours before the test, drink at least 32 ounces of drinking water. Two hours before the test, mix the second pack of fruit pectin with the second drink, sipping it slowly over 15 minutes. Make sure to urinate as frequently as possible to expel drug toxins from your body.
One hour before the test, drink another 32 ounces of water with creatine monohydrate, multivitamin and vitamin B2 pill to replenish the vitamins lost due to frequent urination.

This is the classic Sure Jell method that takes approximately 48 hours to complete. However, if you don’t have enough time to complete a full routine, there are instructions for a shorter version of this home remedy that might help you pass a drug test. A more brief three hours routine offers smaller chances of success, and mostly depends on your toxin levels.

Two hours before the test, mix one packet of Sure Jell or Certo fruit pectin with 32-ounce sports drink. Shake the bottle to dissolve pectin properly and ingest the “detox drink” slowly over 15 minutes.
One hour before the test, drink another 32 ounces of water, followed by multivitamins and vitamin B2 supplements. Urinate as frequently as possible to expel marijuana metabolites from your system.

By following these steps, you should be free from drug toxins by the time you need to pee into the cup. That said, so far we haven’t seen a single fact that this product can remove THC from fat cells of your body where it’s stored, so is there a way to make Sure Jell drug test method work?

Does Certo Work For Heavy Smokers?

Does Certo work for cocaine and THC detox? After hours of research and studying user reviews , we think we can answer this question.

You’ll find a number of reviews on the Internet left by marijuana users that swear of Sure Jell helping people to pass a drug test. However, they can only be regarded as anecdotal evidence at best.

Many people believe that fibers from pectin can absorb drug metabolites from your body fat cells and all the way from the bladder, and pass them though the intestines.
Others believe that pectin somehow lines the bladder, which stops drug toxins in your system from entering it for a short period.
The third group of people claims that they’ve successfully passed urine drug test multiple times by using only this method, without abstaining from drugs.

In reality, there’s no scientific evidence that fruit pectin will detoxify your body in any way. These claims come from people who are not familiar with human physiology and you shouldn’t rely on them.

Here are the facts about Certo that we know:

And to dispel misconceptions about how Sure Jell supposedly works:

In other words, apart from being an ingredient for desserts, pectin is rather useless for detoxification, in any way conceivable. For detoxifying purposes, we strongly advise you to use a specialized product.

Alternatives That Work For Drug Test

Synthetic urine is by far the best option for those who received short notice of an upcoming urine drug test. They are specially formulated liquids whose ingredients mimic those of natural human urine. Only the best synthetic urine brands feature all the necessary elements like urea, uric acid, creatinine, essential B vitamins, etc.

Depending on the brand and the product, artificial urine usually comes pre-mixed. That’s great as it eliminates the need for mixing, leaving you only to heat it to the correct temperature range and keep it warm until you pour it into the testing cup.

Since you came looking for Certo cleanse, we’ll assume you’re on a tight budget. In that case, Quick Fix is a great budget option. It’s cheap and easy to use, and you won’t have to drink any weird substance. You can lean more about Quick Fix in our full review or at the official store: 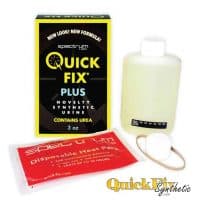 However, if you’re on parole, you may be asked to take a supervised drug test. In that case, you can use a special urination device to fool lab technicians.

Alternatively, you can pass a drug test on short notice using a detox drink. This is particularly good option for a light or moderate weed smoker. This technique may seem similar to Certo and gatorade, except commercial pre-drug test drink formulas contain ingredients with actual detoxifying properties, as long as you opt for brands we recommend.

For instance, Rescue Cleanse is our recommendation for inexpensive but powerful detox drink. You can learn more in our full review or in the official store: 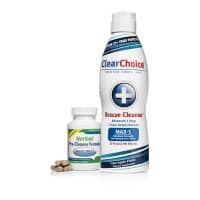 For a limited time, Rescue Cleanse is bundled with free Pre-Cleanse capsules!Click this button to reserve it at the official store:
Get This Deal

Even though detox drinks are somewhat pricier than home remedies, they yield better results in comparison to fruit pectin. And if you have a few days to prepare, combining detox drink with detox pills is a bulletproof solution for drug tests.

Some people mix their piss with things like bleach or baking soda, but this hasn’t been working for years now since a modern lab test will detect unusual chemicals in one’s piss.

Where Can I Buy CertoClear?

CertoClear was a pectin-based product sold online, but at the moment of publishing this article, it’s not available anymore. That’s why we’re not including a full CertoClear review here.

Basically, CertoClear ingredients were fruit pectin with some sugar and food coloring so it’s not much different from combination of Sure Jell and Gatorade (or your favorite sports drink).

Will Sure Jell Help Me Pass A Probation Test?

Most parole and probation screenings are 5-panel or 10-panel urine tests. As Sure Jell/Certo cleanse rests upon dilution, a light smoker might fool a urine test, though there’s no guarantee.

Your parole officer may request you to take a hair follicle test or even a blood test, which you can’t pass using fruit pectin.

How Long Will Certo Last In Your System?

Certo is is mostly fruit fiber, which passes through our intestine and absorbs water, creating “bulk,” which is then pushed out of the body through bowel movement. Exact time depends on your metabolism, but Sure Jell’s cleansing effects won’t last more than a few hours.

Does Certo Work For All Drugs?

There’s no scientific proof that fruit pectin can flush weed, opiates or other drug toxins. If you’re looking to pass a urine drug screen, we recommend using synthetic urine or a high-quality detox product.

Can Sure Jell Be Detected In A Drug Test?

There’s no scientific evidence that suggests that fruit pectin aids natural detox in any way. Furthermore, the technique heavily relies on the ingestion of large quantities of liquid, which may result in sample dilution.

If you want to pass a drug test, you should stick to a top rated detox product that was properly tested and deemed safe, or substitute artificial urine for your own piss, which works great for unsupervised drug test.